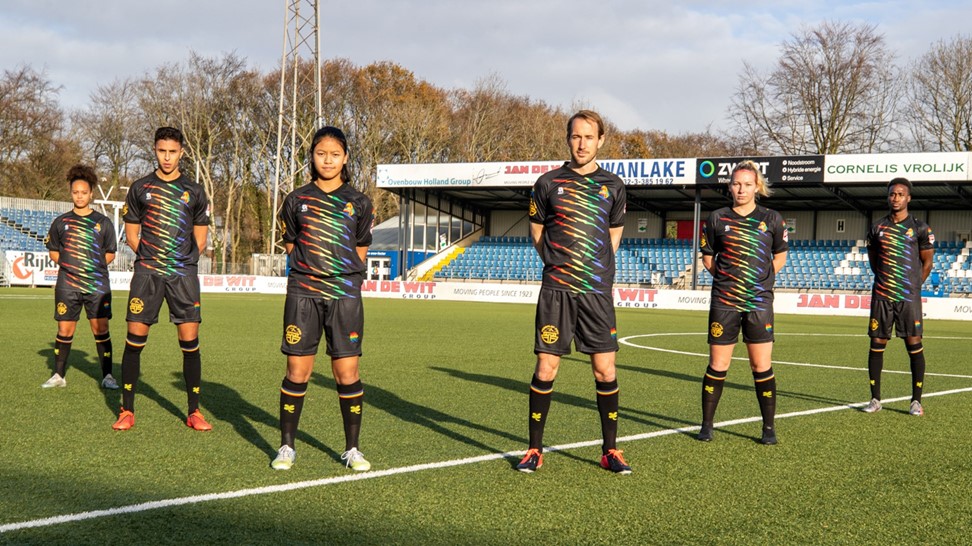 This weekend, Dutch Football supported the #AlltogetherChallenge, a visibility campaign for the LGBTQ+ community.

The reason for the campaign is Purple Friday. In the Netherlands, the second Friday of December marks Purple Friday (or Spirit Day). A day on which people wear purple to raise awareness for the LGBTQ+ community and especially for the need to create a safe environment for LGBTQ+ youth. Such a day is important as still 1 in 5 people from the LGBTQ+ community have to deal with severe negative comments and violence in the Netherlands. The #AllTogetherChallenge has been co-organized by the John Blankenstein Foundation, a foundation who’s goal is to create acceptance for LGBTQ+ sporters. As part of the challenge, both the first men’s and women’s team of Telstar played in a special rainbow kit. Furthermore, all the captains wore the #OneLove captain’s armband, normal corner flags were replaced by rainbow flags, trainers, coaches and members of the press wore a rainbow-pin and FoxsportsNL used special rainbow microphones to interview the players.

Normally, the Dutch leagues organize a visibility campaign surrounding Coming Out Day in October, but this year, due to COVID19, the campaign has been moved to Purple Friday. As Purple Friday is mostly directed at students, the #AllTogetherChallenge also included guest lesson in middle- and high schools this year. One of the guest speakers was former Manchester United and Bayern Munich coach, Louis van Gaal. He spoke about the fact that everyone should feel free to be who they are and who they want to be.