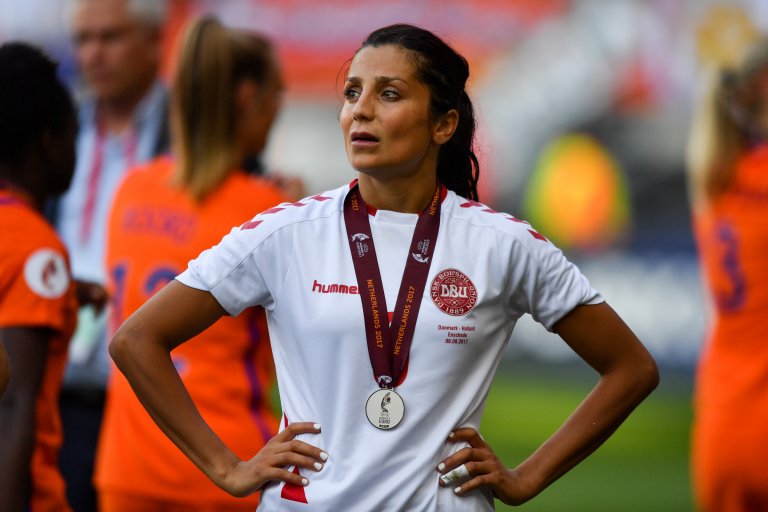 Football is full of inspirational stories of men and women, from all walks of life, who live their dream, follow their passion, and achieve success. But there are few stories as inspiring as that of Nadia Nadim, player of the Danish national women’s team, who recently won the French League title with PSG.

With enormous willpower and drive, she made her way to the top of European football, overcoming tragedy and adversity from a young age. Of Afghan descent, Nadia lost her father who was killed by the Taliban in 2000, when she was only 11 years old. With her mother and four sisters, she fled to Europe with forged passports, finding a safe haven in Denmark. This is where she began playing football at B52 Aalborg, making her debut in the Danish national team in 2009. She has since earned 98 caps, scoring 38 goals. Her impressive career, during which she has already scored nearly 200 club goals, brought her to playing for Manchester City and PSG, recently moving to Racing Louisville FC.

Success on the pitch is not all. Nadia is studying to become a reconstructive surgeon, speaks 11 languages, is on the Forbes list of most powerful women, supports charity work for refugees and is active as ambassador for the United Nations.

Nadia Nadim is a role model for all young girls and women who want to pursue their dream and a brilliant example that football can bring out the best in people, offering unexpected opportunities and setting inspirational examples for others to follow.

As part of its campaign “Women in Football”, EFDN would like to pay tribute to Nadia Nadim.