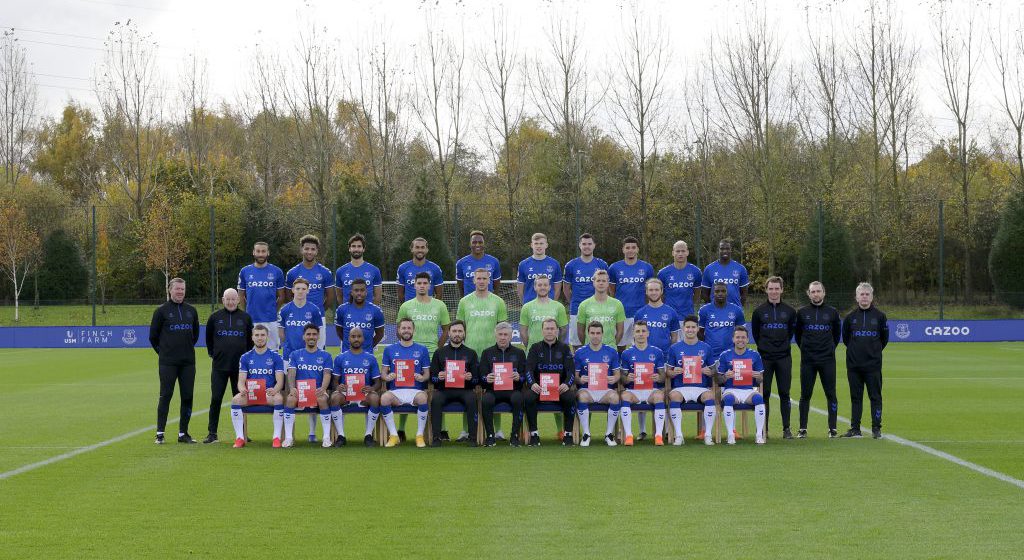 This week two new clubs joined the Show Racism the Red Card campaign. Premier League club Everton FC and the Dutch club NAC Breda, currently playing at the second-tier level in the Nederlands, are now taking part in the European-wide anti-racism and anti-discrimination campaign. They join clubs such as Brentford FC, Rangers FC, Benfica, Werder Bremen and Club Brugge in taking a stand against racism. Show Racism the Red Card utilises the social power of football and the high-profile status of football players to help tackle racism and other forms of discrimination in society. The project aims to raise awareness of diversity, foster social cohesion, and reduce physical and verbal violence linked to racism.

Everton FC joined the Show Racism the Red Card campaign and published a photo with the first team. Everton FC and its foundation, Everton in the Community have been supporter of the UK’s leading anti-racism charity ‘Show Racism the Red Card‘. Now Everton FC are taking part in our Europe-wide anti-racism and discrimination campaign as well. Earlier this year, Everton stars Moise Kean (currently on loan to Paris Saint-Germain) and goalie João Virgínia joined 140 primary school children from Merseyside at an educational event from Show Racism the Red Card UK. The event was hosted by Everton in the Community. During the annual workshop Kean and Virgínia reiterate to the youngsters the importance of stamping out racism in society and in football.

The same week, Dutch club NAC Breda joined the European-wide campaign as well. NAC has been a close partner of European Football Development Network – the coordinating organization of the Show Racism the Red Card programme – since the start. Besides NAC players Lewis Fiorini, Nick Venema and Mario Bilate publicly taking a stand against racism, NAC is integrating elements of the #DiversityWins eductional programme in their Street League programme. #DiversityWins is the educational programme of the Show Racism the Red Card project.

The Breda NAC Street League is a football competition for girls and boys aged from 12 to 16 years old. All elementary schools, districts or villages in the municipality of Breda can participate in the competition and register a team. The games will be carried out at local fields in the districts. The games are played with a specially designed scoring system, which determines that bonus points can be earned through positive social behaviour as punctuality, fair support and respect. Moreover, the teams can win additional points when participating in workshops or carrying out community tasks.One of the workshops is focused on racism and discrimination and is delivered with the help of the team of Show Racism the Red Card.