This week marks the Solidarity Week, a week to raise awareness to racial inequality that exists in football and in our society. Despite fans not being allowed in the stadiums, in the past months we have seen a surge in online racist abuse directed towards footballers. There have been numerous players, such as Lauren James, Paul Pogba, Marcus Rashford (Manchester United), Reece James (brother of Lauren James and player of Chelsea FC), Romaine Sawyer (West Bromwich Albion FC) and many more that have faced racist abuse in the past months. This weekend it was Ranger’s Glen Kamara and Dortmund’s Jude Bellingham. Clubs have been really clear on that they do not tolerate racist behavior in any form. Also in the wake of the Black Lives Matter protests in the summer of 2020, clubs in the United Kingdom especially took a collective knee in support of black lives. With the social power that football has, it more important than ever that clubs are outspoken about social issues such as racism, whether it be structural racism or everyday racism. In the past few years we have seen a lot of excellent examples of clubs actively engaging to combat racism. Clubs are no longer silent.

One way clubs – our their foundations – contribute to addressing racism is by running CSR (Corporate Social Responsibility) programmes. This can be through an educational project, physical activities, fan-projects or by working with grassroots clubs. Education is regarded as one of the most important strategies to combat racism and educate the next generation on the harmful effects of racism. One example of an educational programme is our Diversity Wins programme. The programme is delivered by Club Brugge Foundation (Belgium), Werder Bremen (Germany), Inter Campus (Italy), Fundacão Benfica (Portugal), Chelsea FC Foundation, Rangers FC Charity Foundation, Brentford FC Community Sports Trust (United Kingdom) and PFC Ludogorets (Bulgaria). During a 10-week programme, clubs discuss the topics of racism, discrimination, LBGTQ+ and homophobia, religion and norms and values in schools. The programme is designed for 7-15 year olds. Additionally, clubs such as Toulouse FC, NAC Breda and Excelsior Rotterdam deliver workshops based on the Diversity Wins programme.

You can download the educational material that the clubs use for free from our website under resources.

The Diversity Wins is not the only edcuational programme that clubs implement to address racism. Dutch Clubs ADO Den Haag and RKC Waalwijk have been implementing their own educational programmes ‘The Hero’ and ‘Every1Equal’ for a long time. ADO has been running their ‘The Hero’ project since 1996. Recent partner in the Red Card campaign, 1. FC Heidenheim is collaborating with local schools to discuss the issue of racism and how everyone can work together to tackle racism and discrimination. In the United Kingdom, clubs have been working with Show Racism the Red Card UK and Kick it Out.

In Germany, Borussia Dortmund – which is known to have few right-wing extremists attending their games – is leading the fight against right-wing extremism and anti-semitism in Germany. Since the 2000’s the clubs has been working closely together with fans to decide what language can and cannot be used in chants in the stadium. By implementing programs addressing racism and anti-semitism, the club has been able to counter controversial right-wing influences. For instance, the club organizes visits to concentration camps where Jews from Dortmund have been murdered (read more). Additionally Borussia Dortmund has partnered up with Feyenoord Rotterdam, the Anne Frank House and the FARE Network to address anti-semitic chants. You can read more about the project on changingthechants.eu.

Another club that has had problems with right-wing extremism infiltrating their fan base are Chelsea. Especially in the 80’s, when they had a hooligan problem with right-wing affiliations. The club launched their Say No to Anti-Semitism programme in 2018. They work together with partners such as the Anne Frank House, the Holocaust Educational Trust, Kick it Out and more. Activities have included a visit to Auswitz, organizing educational events surrounding Holocaust Memorial Day and the creation of a commemorative mural of Jewish football players and British POWs who were sendt to Nazi camps near Stamford Bridge.

Perhaps one of the most well-known clubs combatting racism and promoting tolerance and diversity is FC Sankt Pauli from Hamburg, Germany. Supposedly, the switch came around the 1980’s. The club attracted a lot of left-wing fans because they were friends of the goalie, who belonged to a squatters community. The left-wing ideology among fans grew also to counter the right-wing ideas that were present among the fan base of Hamburg rivals HSV. FC St. Pauli became the first professional football team in Europe to establish a discipline code for the stadium. It prohibited racist, fascist, sexist or homophobic comments. Those unable to follow the code have been banned from the stadium. This code has now become the blueprint for many other professional football teams in Germany. One of the main pillars of FC Sankt pauli is solidarity. In recent years, this has been solidarity with refugees. For instance, within its overall structure the sports club has several branches. One is a refugee team FC Lampedusa (named for the Italian island where thousands of refugees landed). Being a member of FC St. Pauli equates with being antiracist, antifascist, anti-sexist and anti-homophobic — the Millerntor Stadium is the only stadium of a professional football team in Europe with a rainbow flag waving in the wind above the stadium — as well as also being against the ongoing commercialization of soccer.

Additionally to educating people on the harmful effects, have role models and best practice examples from clubs actively fighting racism and other forms of discrimination, it is important to get people talking about racism and actively take a stand. Therefore, additional to the Diversity Wins educational programme, we launched an awareness raising campaign. The Red Card campaign consists of disseminating our Red Cards in 27 languages to professional and grassroots clubs all over Europe. By taking pictures and videos of players with the Red Card, clubs take a stand against racism. You can download the red cards for free from our website or a printed set can be requested via the contact form. Currently, we have close to 100 clubs, both professional and grassroots, participating in our campaign. A few of the most recent clubs that have joined our campaing are SD Huesca, Getafe FC, Montpellier HSC, Toulouse FC, SV Sandhausen, VfB Stuttgard, 1. FC Heidenheim, and 1. FC Nürnberg. 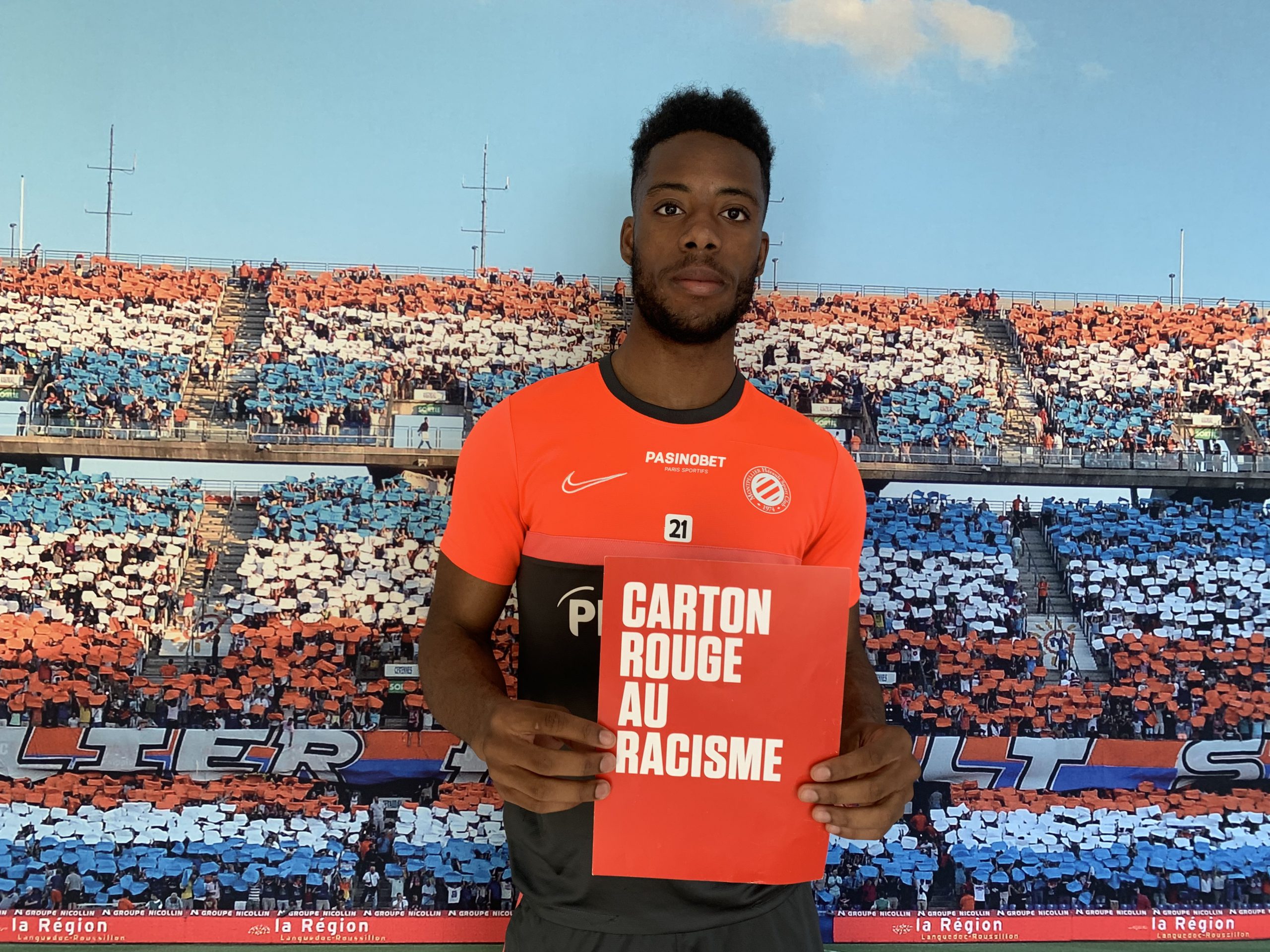 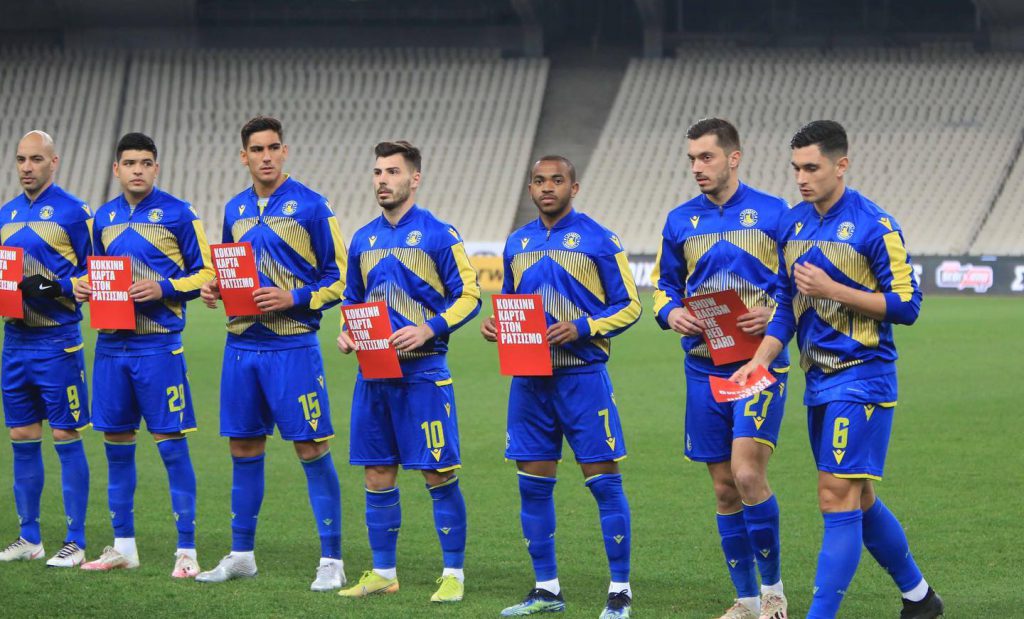 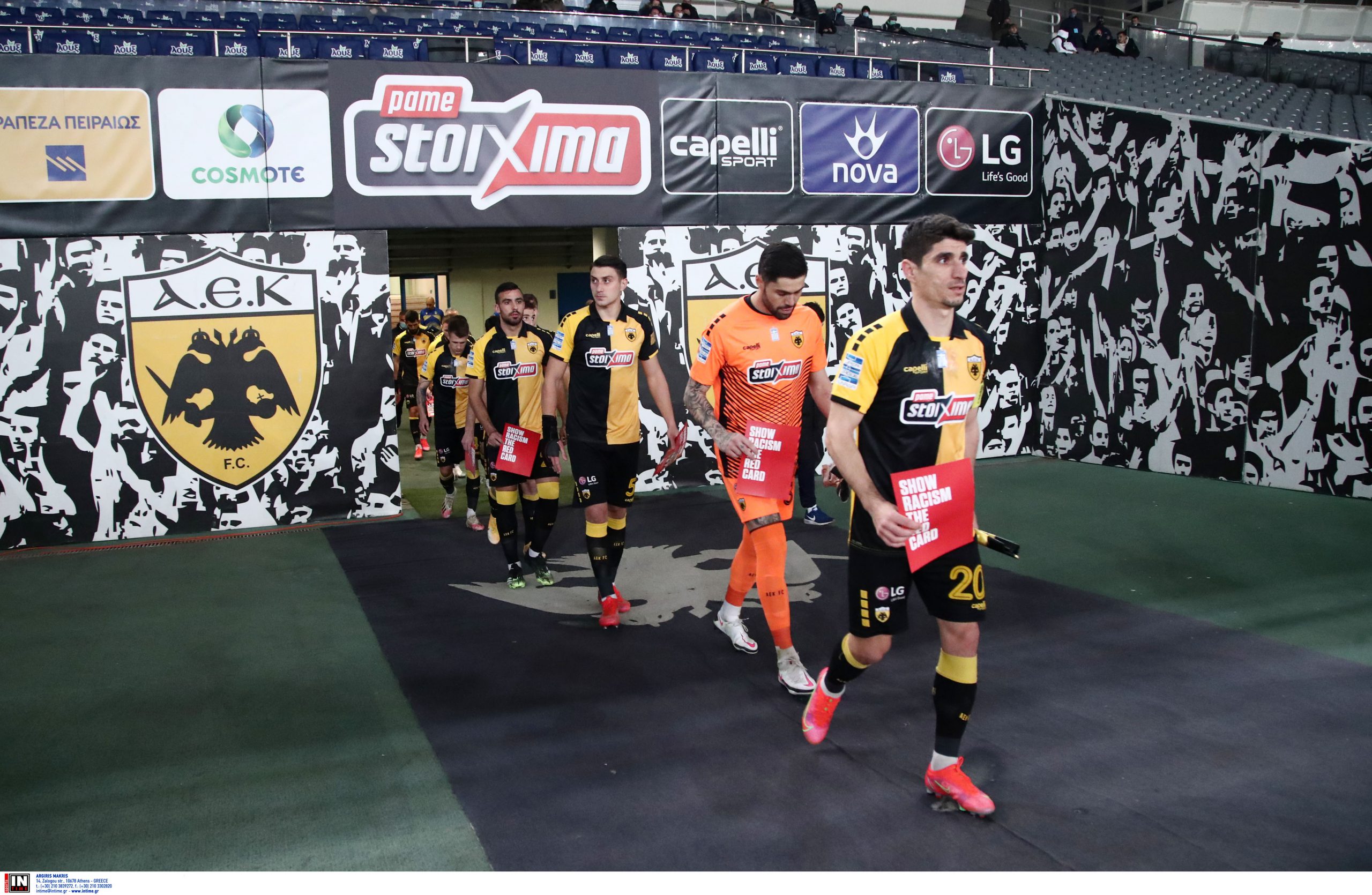 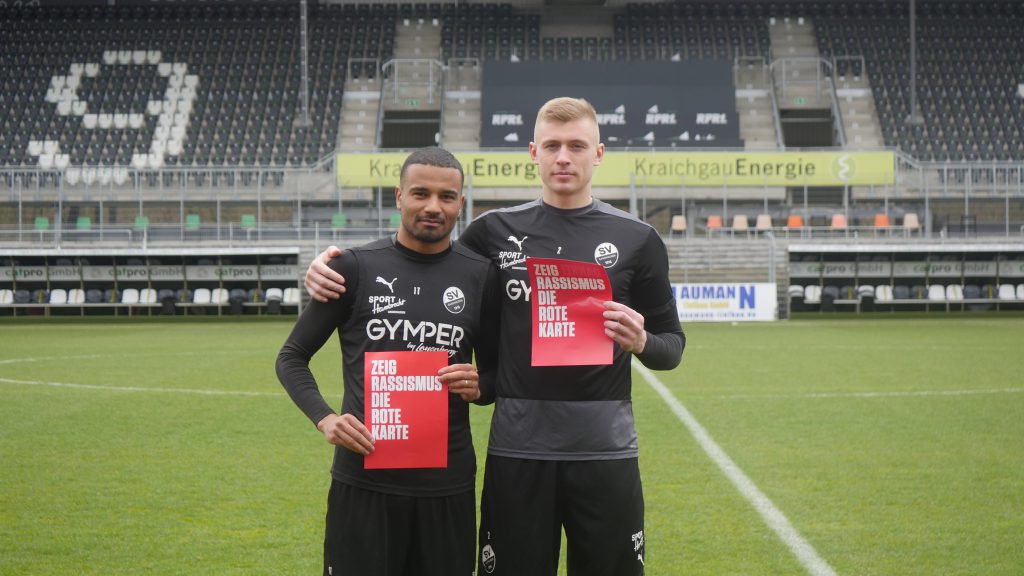 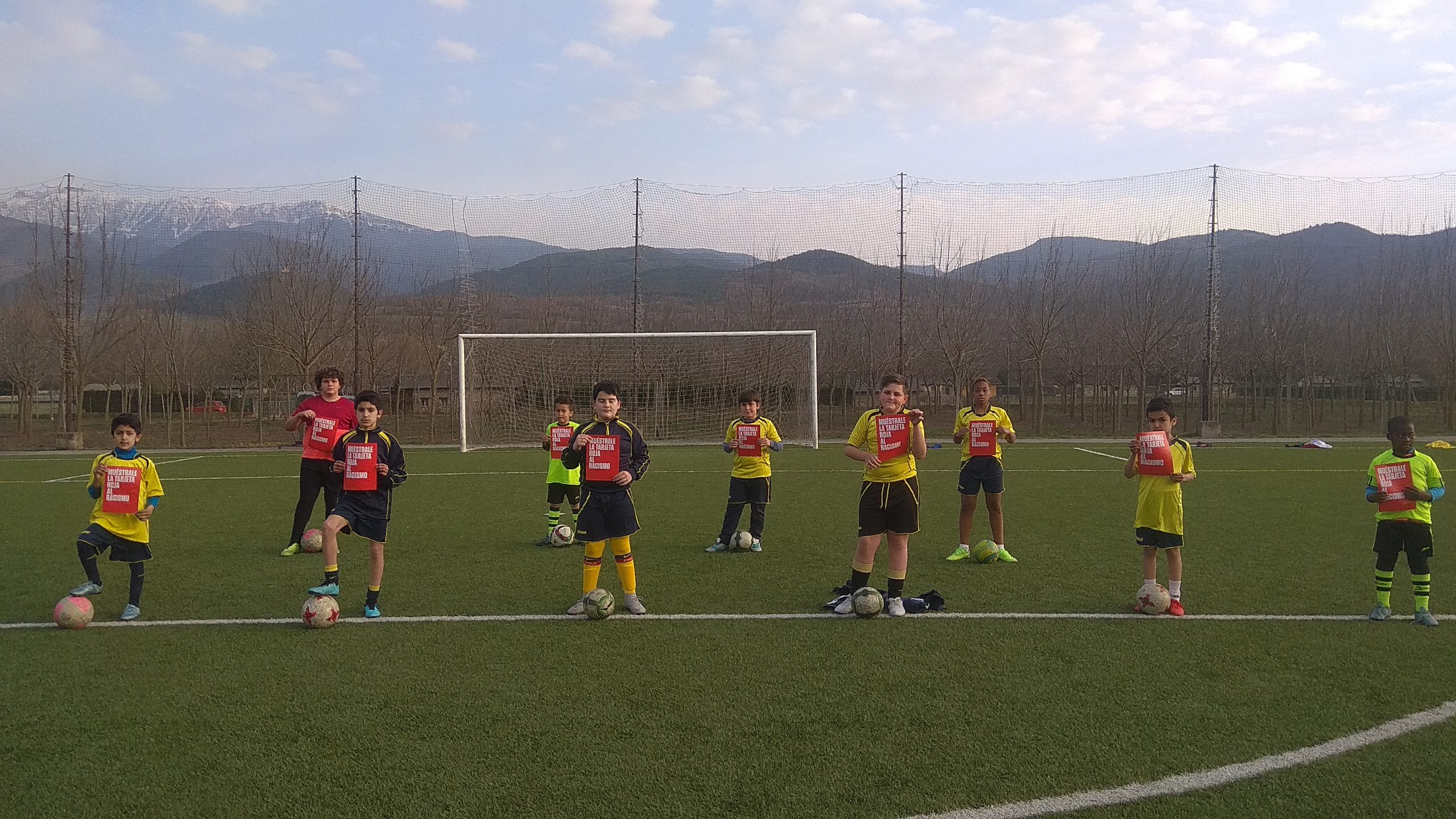 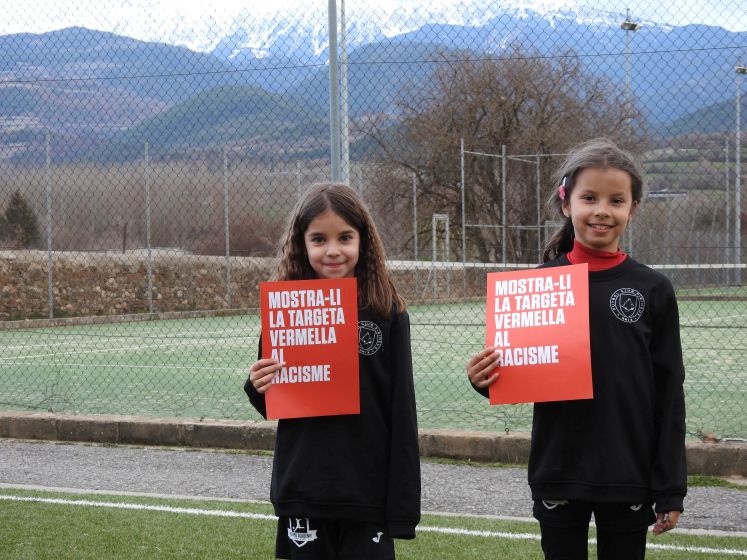 Show Racism the Red Card is funded by the European Commission