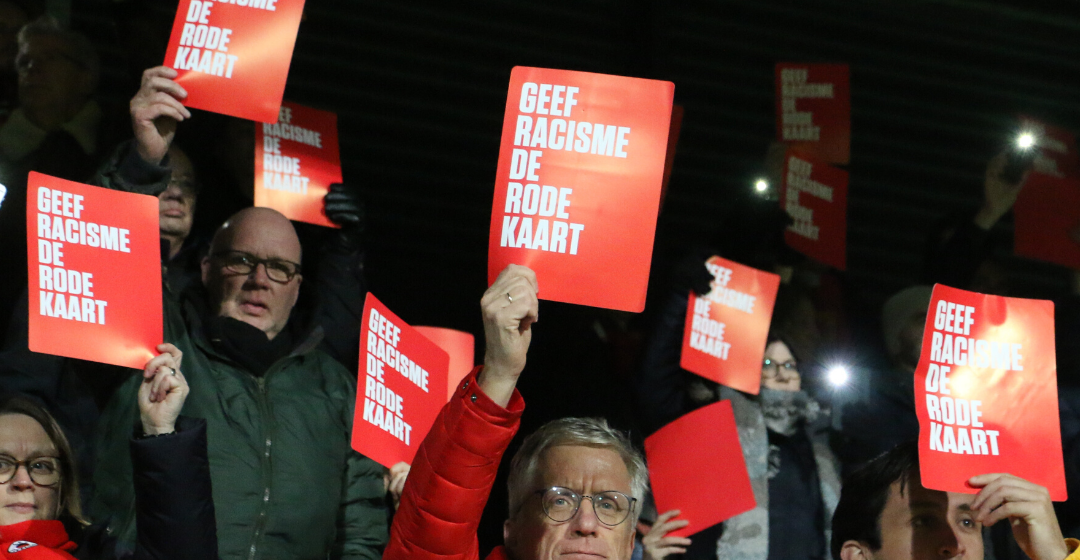 Racism in and around the stadiums remains a major problem.  Football associations, clubs, and local governments are actively developing initiatives to make racism in football a thing of the past, most notably by implementing the Show Racism the Red Card campaign. But these initiatives will not fully succeed unless football supporters – in other words, all of us –  stand up, literally, and make it clear that racism in football will not be tolerated.

There is already ample evidence that football supporters taking a stand can be very effective in eradicating racism. For example, in February 2020, during a football game in Germany between Preussen Münster – Würzburger Kickers, home fans from Münster chanted ‘Nazis out’ when a ‘so-called’ football fan was making monkey noises against a black player from the rival team. Fans helped to identify and escort the fan to the exit where he got arrested by police. But there have been more fan initiatives.

For instance, during a match against Manchester City in 2019, fans of Everton unveiled a huge banner saying ‘No al Razzismo’ to show their support for their player Moise Kean who had been a victim of racial abuse. Furthermore, Birmingham City fans marched through the city to show their opposition to racism in football, calling for respect irrespective of the colour of your skin. In the Netherlands, thousands of supporters of Excelsior held up the #ShowRacismtheRedCard in the 18th minute of a match to condemn the racism their player Ahmad Mendes Moreira (who wears number 18 on his jersey) had been exposed to in one of the previous matches. There are many other heart-warming examples of supporters who say ‘enough is enough’ and ‘stop racism’ and by so doing help change the culture in and outside the stadiums and unite the world of football.

Racism hurts and demeans people. Show your solidarity; every one of us can be a key player in ridding football of racism. For campaigns such Show Racism the Red Card as to work, we need you. When we are all allowed back into the stadiums to watch our favourite teams and you witness a racist incident, raise your voice, stand up, show this is not OK. Also do not hesitate to act when you see racism on social media, for example, by notifying the platform or adding a link to an anti-racism campaign like Show Racism the Red Card.