Jesús Tomillero is a Spanish former referee and founder of Roja Directa LGTBI, which is a non-profit association that defends the rights of LGTBI+ people.

He was the first football referee in Spain to declare himself openly gay, being the first Spanish and among one of the few European professional referees to declare it publicly. After making it public, he received all sorts of insults on football fields and death threats on social media.

In his book, “Volar sin barreras” (“Flying without barriers”), Jesús tells his story and all the obstacles he faced on football fields and in his personal life, after coming out in football.

Jesus, you started refereeing at a very young age and your dream was to become a professional referee, but there was something that stopped that dream. Could you tell us what happened?

Of course! First of all thank you very much for your support. I wish there had been entities like yours at that time.

I started refereeing when I was 11 years old and for me it was much more than a hobby, it was my way of life and the way to make my daily life a little easier and more bearable.

I knew from a very young age that I was gay, but sometimes you had to hide it and you couldn’t be as free as you would like to. Refereeing, I avoided those problems and bullying that I lived through every day, until one day my life took a turn.

The day I exploded, when a material manager reproached me for a corner and I saw that it was a throw-in. That coach began to question my worth as a professional because of my sexual orientation. He told me that I was a “shitty faggot”, he told me that I was going to burst my head, that I should be in my house playing dolls, so I went to him and told him he was expelled.

That did not lead to him leaving the sports facilities, he stayed in them and I had to stand while he yelled at me and insulted me. Then, a minor from the game I was refereeing for, started telling me that I was a cocksucker, so I got him the red card too. And that got much worse, the insults and threats began, so I decided to stop the game and went to the dressing room, called the referee’s delegate, told him what happened to me and that I wanted to suspend the game. He told me that I could not suspend the game, that I had to continue, so I wiped away my tears and continued refereeing.

When the game ended and I went to the dressing room, there were people who threw stones at me and I received more insults and threats, so I had to call the police and when they came I had to go out for another door.

But that did not stop there, I went home, posted on Facebook what happened to me and it went viral. They tried to silence me, saying that they would lower my status as a referee if I spoke up and I told them that it was my right, that I could not be deprived of my freedom of expression.

We all have to denounce what is invisible, what is visible in society, but we don’t want to see it. And at that moment I thought that I had to report it and not shut up. That meant that in the following games I received even more insults and more threats. And that made me lose the desire to referee and wonder why this had to be happening to me. Why? If I am as valid as my other colleagues. That made me reflect and unfortunately leave what I started with 11 years and ended with 20-21 years.

But that did not stop me from continuing to fight, so that there would be a society where we all have the same place and the same rights, regardless of our sexual orientation, race or political ideology.

Many times I asked myself if it was necessary to report, if it was worth anything, because I do not do or continue to enjoy what filled me. The first weekends were very hard, not being able to prepare the referee’s suitcase or go to train with my teammates. Too bad I gave up my dream.

This even led me to go to the European Parliament and found the association of which I am president. The visibility that Spanish football needed, for it to be spoken, for it to be denounced and for Spanish clubs to raise their voices a bit.

Do you think that since that year until today, the situation has improved?

I believe that we have improved in many factors. At that time I had no references, I did not have the support of the Royal Spanish Football Federation or the High Council for Sports , but I think we have made progress and work is being done. I think it was necessary to have a figure who would raise their voice and say what really happened.  We always had that fear of saying publicly we were homosexual, or bisexual or trans within the world of football, for fear of reprisals , to rejection, a fear that still exists today, especially for the trans community. There are many restrictions for trans women or trans men to have the same rights as anyone else in sports, but it is already on the table.

What I do see is necessary for the sports law to change, to include LGTBphobia as a hate crime, which to this day has not yet been modified or is being worked on, and I wish there were more campaigns against it, especially in the world of football.

What is the most important thing for you to do to fight homophobia and transphobia?

I think that to continue moving forward there has to be equality and just like when there are racist incidents games are stopped, they should stop the game when they hear the fans yelling “faggot” at a player. The sanction that they gave to the person in charge of the material who insulted me was 50 euros, do we think that with this sanction this LGTBphobia or this racism will stop? I do not think so.

We need exemplary sanctions that hurt the clubs monetarily, because otherwise the clubs will not try to stop them. But often the same clubs and the federations are to blame for not doing this. If they stopped it, I know I wouldn’t hear any more screams.

Therefore, for you the position of the clubs against LGTBphobia is the key.

I believe that football needs that training, it lacks training and information on many subjects, both in racist crimes and LGTBphobias. Perhaps for them sometimes the shouts / insults like “faggot” or “shitty nigger” cannot have an impact, but the screams we hear can make many young people take their lives today and make them afraid to practice some sport.

When I received insults and even death threats on social networks, there was a moment that crossed my mind to take my life, but it was stronger to be able to help people who right now may be watching us and who need us to continue fighting . They cannot win the game, we have to win it against any kind of intolerance. That made me strong and I hope that federations and clubs will make an effort to train and educate people.

We have to continue moving forward in many diversity matters and if the clubs are not formed in diversity, I believe that they will not be the referents we need in the world of football because football moves money, but it moves many followers.

The greatest impact would be that the same coaching staff is trained in diversity matters, because saying something that is not even intended has repercussions on thousands of people. Also the foundations of the clubs would have to work on the training of the staff, workers, security. Everyone has to be aware of what is really going on in this society.

Do you also think that pioneering leaders and clubs are needed to start developing these programs?

Sure! I think that if any club launches a campaign against homophobia, as FC Barcelona did one day, it helps thousands of people not to be afraid, thousands of people who question playing sports to say “Well, I can”. Right now, we need that push to remove those stereotypes, that internal fear that we live.

Nowadays, I would love to referee again, which I know it will not be possible, but being able to get someone who is afraid to do it, is much more enriching and makes it worth the effort. That I would sacrifice myself in not being able to practice football, but there are people who are already doing it.

And why do you think there is such a difference between women’s and men’s football in terms of inclusivity?

I think women’s football is more inclusive because it has suffered a lot of discrimination, and now the situation has changed a lot, but it is still very difficult just for being women. I think we want a society where men’s football is equal to women’s and has the same economic and social equity. I hope that very soon we will live in a society where we do not have those gender stereotypes and that there is the same equality, without the need to label anyone.

I feel very grateful to women’s football because it is breaking the stereotypes of football that is believed to be straight and with strong men playing it,  and no, football belongs to everyone, regardless of their orientation, identity or gender. Sometimes we forget the human part, that sport is diversity and fun.

What advice would you give to a person who may be living what you lived?

In my book “Volar sin barreras” (“Flying without barriers”) I tell my story and above all I tell that many times you have to leave behind those fears and insecurities. Life is going to put us through many obstacles, but nobody has to take away the hope. Sport is much more than that.

From here I say to not be afraid, be brave, and despite those obstacles that life puts on us, we have to be much stronger. And that you are not alone, you will always have us fighting by your hand for the same goal, which is equality and human rights. Score a goal against all that racism, that LGTBphobia and all that intolerance that we live every day. 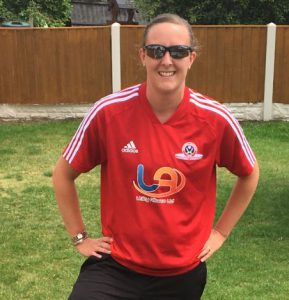 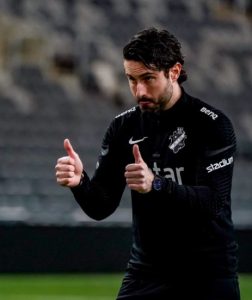 Max Bergander is responsible for the Core Values programme at AIK Fotball in Sweden. He also used...
read more 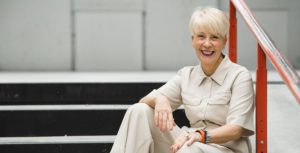