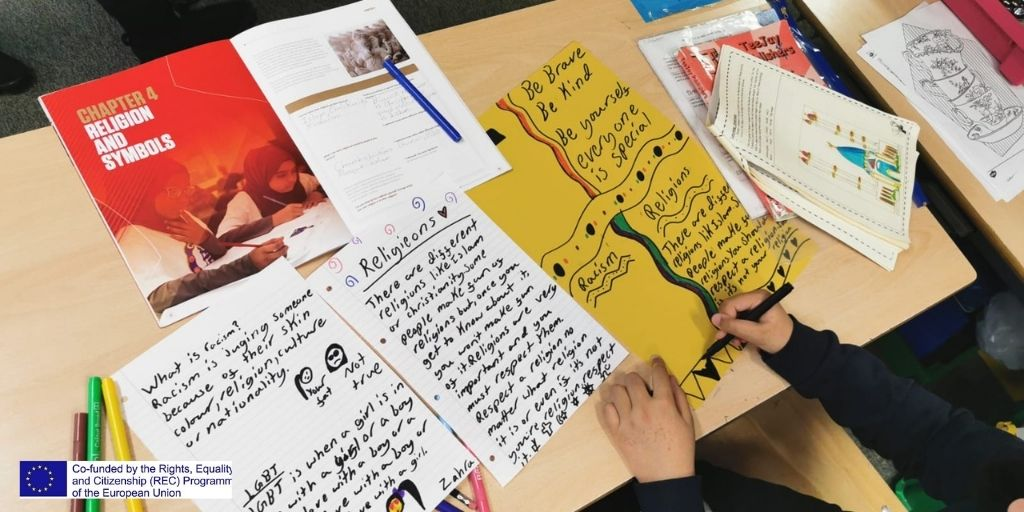 Bee is a jovial lady, in her early twenties, who has always lived in East Jerusalem, where she previously studied and now works. She loves football so much that a few years ago she joined Inter Campus as a coach. Bee’s goal was to allow as many girls and boys, whose destiny is often marked by stereotypes and prejudice, to play and grow as a person. According to Bee, the main issue of the region is the lack of ethnic and religious integration, which makes it sometimes difficult to establish conversation between the different kids.

“In the first two years the relationship between the children was very complicated. The children did not want to talk to each other, they did not want to stay together. First of all, they speak different languages. The Jewish people do not know Arabic at all. The Arab children know a bit of Hebrew on the other hand, but not enough to hold a conservation. But after those first two difficult years, things got better and I’m happy! The Jewish and Arab children now play together, and even argue! They say: “I want that Jewish boy in my team!” They want to be on the same team. Things are getting better”.

It is important to highlight the importance of raising awareness and educating other on people’s experiences and stories. Sometimes our society can negatively influence us, so than it’s important to hear stories from others too. For instance, about girls playing football and coaching, as this is not always a simple thing.

“As for the girls… first of all I am Arab so I have encounterd several problems and I do not want the other girls to have to face what I have faced. I know it will be difficult for them as society sometimes looks down on Arab girls who play football, because they say that footall is a sport for men. I do not believe in these things and I try to do my best to create a team on my own. Together with Inter Campus, I work with boys and girls from the ages of 6 to 12 years old and I see them having fun. So why can’t girls then play football? It’s a sport for everyone. Everyone loves football! Girls also have the right to play and this is one of the goals of Inter Campus, to get more girls to come out and play.

“Before the start of Inter Campus project, the situation here in Damonovici was very bad. There was no relationship between the Croatians (mostly Catholic) and the Bosnian (mostly Muslim) kids. There were bars and shops run by Croations and there were shops and bars managed by Muslims. The Croatians did not go to the Muslims and the Muslims did not go to the Croatians. There was one school building, but it was actually two schools under one roof where the children never met. Even the half-time bell rang 15 minutes apart in order to avoid any connection. As Damonovici is a rural village, children arrive to school by bus: there were two minibuses, one for the Muslim children and one for the Croatian children.”

According to Zejd, who has spend years reinforcing the idea of an intercultural dialoge, the legacy of that mindset that we can unhinge through sport, clearly transpires. You can be Croatian or Bosnian, Muslim, Orthodox or Catholic, without distiction. This could be the strongest emblem of a society that embodies parallel lives, perhaps integrated, yet not fully reconciled.

Within Inter Campus, children are allowed and encouraged to meet, get to know each other, and play together. This helps sow the seed for the future and serces as an example for adults.

“Kids used to play on the pitch together, but parents were totally divided. It honestly took three years for the parents to start exchanging a few words. There were no problems among the children because they were young and not yet aware of these things. The best thing that happened to me has to do with my son Mirko. When he was 12, a friend of his, Riyadh, a Muslim, invited him to his birthday at home. That occasion was the first time I entered that village. I took him and left him in that village for the birthday party. He was alone there with the Muslim boys. Somehow I “used” my kid to show other Croats that it can work”.

Like Zejd, Inter Campus works towards peace and reconciliation within these communities on a daily basis. Perhaps taking our cue from the football pitch, where joy of a goal overcomes every barrier, either ethnic, religious, economic or social.

*Bee and Zejd are not the real names of the storytellers. The real names are protected due to privacy reasons, but are known by Inter Campus.